news
Blog
HOW TO WRITE A SCREENPLAY FOR CINE-STORIES

HOW TO WRITE A SCREENPLAY FOR CINE-STORIES

The rules for writing cine-stories scripts are very similar to traditional TV and feature film screenplays but are not as strict with regard to formatting. It doesn’t mean you can go off the industry format so stick to the main rules.

See an example of the ESCAPING THE CAMERA photo story screenplay below to find out what format of script we are required.

The PHOTOGRAPHER - a young man, playboy. The MODEL - pretty young lady. UNKNOWN GIRL - the young woman in the photos; she looks cute and seductive at first, but dangerous and menacing afterward. JOHN - a repairman and friend of the PHOTOGRAPHER.

The PHOTOGRAPHER invited the MODEL to a photo shoot. He found a nice place in the forest and wanted to show it to a girl.

PHOTOGRAPHER takes some photos of the MODEL among the trees.

MODEL
I’ve never felt so beautiful ... That was an amazing experience, thank you!

PHOTOGRAPHER
Let me add you to Viber! We’ll get together tonight to transfer the pics ...
And maybe not just that ...

The MODEL leaves. The PHOTOGRAPHER suddenly sees a glow near the tree. He approaches and finds an old-fashioned digital camera

PHOTOGRAPHER
Hmm, what is this weird light?
Someone hid a camera in the tree!
But the glow’s giving it away!

The PHOTOGRAPHER picks up the camera and starts to investigate it.

PHOTOGRAPHER
(aloud to himself)
It's some kind of old-school camera. It looks like one of the first ones made.
Let's see if it works!

The PHOTOGRAPHER takes a test shot. He looks at the screen and sees the silhouette of an UNKNOWN GIRL.

PHOTOGRAPHER
Yep, it took a picture! I’m gonna take another one!
Oh, and there's the new model.

The PHOTOGRAPHER makes a few more shots. In every new shot, the UNKNOWN GIRL’s silhouette comes closer to the viewer on the camera screen. But in reality there is nobody in the forest except the YOUNG MAN.

PHOTOGRAPHER
She’s getting closer ...
Huh?? Where did she go? That’s creepy ...

The PHOTOGRAPHER is sitting in the car. He is excited and desperately trying to figure out what is going on.

PHOTOGRAPHER
(thinking to himself)
This is ridiculous! Who left this camera in the forest? Who's that girl? Where in the world did she come from and where did it go? She only showed up in the pictures. But how?! I’ve gotta take some pics in another place

The PHOTOGRAPHER tries to understand what is happening. He conducts experiments taking pictures in the room. The UNKNOWN GIRL reappears on the screen against the background of the wall. This time the silhouette becomes even closer. Her face appears to have a demonic look.

PHOTOGRAPHER
Let's see, are you gonna appear now?!
Damn it! Now she’s even closer!
This is freaking me out ...
Maybe I'm just imagining all this. I need to show the camera to somebody else.

The PHOTOGRAPHER sits in the car and phones his friend JOHN who is a camera repairman.

PHOTOGRAPHER
Hey, John, help me out! Since you know all about cameras, you gotta check out this strange one I found.

JOHN checks the camera trying to help. He cannot detect anything wrong but he presses the camera shutter accidentally.

PHOTOGRAPHER
This is the camera I was talking about. Look, is there anything strange inside it?

JOHN
What do we have here?

JOHN
(leaving)
Just a typical piece of junk! And you, man, need to chill out about it.

The PHOTOGRAPHER is sitting on the bed in his room and checking the pictures on the camera screen.

PHOTOGRAPHER
Damn ghost! There she is again!
(hiding the camera in the nightstand drawer)
I'm gonna hide this thing far away from me ...
Maybe John is right and I just need to relax ...

The MODEL is sitting in her room and talking on the phone with the PHOTOGRAPHER. She is smiling and happy.

MODEL
I was just thinking about you and our photo shoot! It was so cool! Let's hook up!

The MODEL and PHOTOGRAPHER are standing close to each other. They look at each other with passion. Their appearance is disheveled.

MODEL
(taking off her high heels)
So, I should show you "more feeling?"

The MODEL and PHOTOGRAPHER are lying in bed, kissing and making love.

The MODEL and PHOTOGRAPHER are sleeping. It is a dark in the bedroom. There is one beam of light in the room. It  shines from the the bedside drawer. The light piques the MODEL’s is interested.

MODEL
Hmmm…  what’s he hiding in there?
Cool, a toy camera!

The MODEL takes the camera and starts to photograph herself

MODEL
I'll give him a surprise so he doesn’t forget about me.

The PHOTOGRAPHER wakes up and is scared. He snatches the camera from the hands of the MODEL.

MODEL
Jerk! Have fun hanging out with your gadgets!

The PHOTOGRAPHER is alone. He looks at the camera with horror.

PHOTOGRAPHER
Please don’t let her be there ...

PHOTOGRAPHER
Oh my God… there she is!
Who are you?
What do you want?

The PHOTOGRAPHER gets scared and presses the camera shutter accidentally. This is the camera’s last picture. Camera falls to the floor. There is no one in the picture.

INT. INSIDE THE CAMERA - NIGHT

The PHOTOGRAPHER disappears from the bedroom and shows up on the camera screen.

The UNKNOWN GIRL takes the camera with the PHOTOGRAPHER’s image. She looks at him.

UNKNOWN GIRL
Get used to it, because you're going to be in there for a long time!
(approaching the window in the room)
Hello, world!

See the final photo story based on this script: 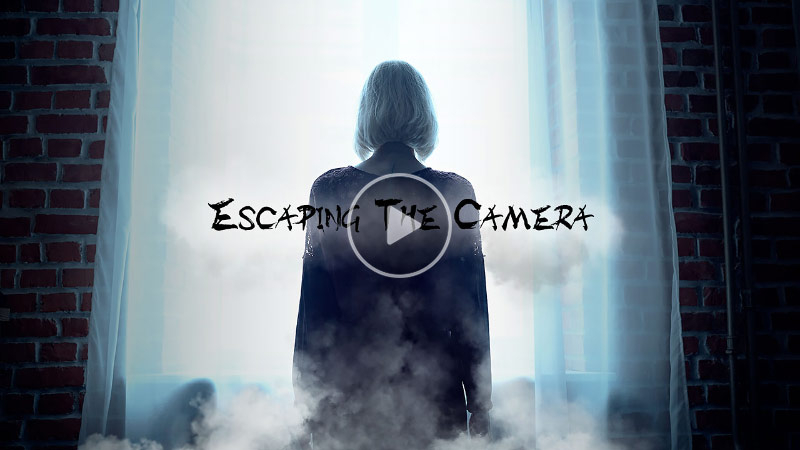