news
Blog
The history of the Halloween

The history of the Halloween

Halloween nowadays is one the most interesting and cheerful holidays. It is celebrated on the 31st of October, but many activities dedicated to it usually start few days before. Both children and grown-ups take part in this carnival atmosphere. It is very popular in the USA, but in the last couple of years it has become an international holiday. Many shops offer special discounts, while theaters, clubs and restaurants throw special Halloween parties etc.

But don’t forget that originally Halloween is a festival of the dead. It came to us from Ireland. The name “Halloween” is actually an abbreviation of All Hallows’ Eve. It’s believed this evening the veil between our living world and the otherworld is lifted, allowing supernatural beings like ghosts and ghouls to come to us. The main sign of Halloween is a Jack-O’Lantern or hollowed-out pumpkin. It is cut up to look like a frightening face and a candle is placed inside. People wear different costumes and masks and go for searching for sweet treats. Traditionally costumes have to “turn” people into witches, ghosts, ghouls, vampires, zombies or something like that. Participants go from house to house, knock the door and say: “Trick or Treat”. If they get a treat, they go away. But if they don’t, they play tricks.

Another theory tells us that Halloween is even older. The celebration of the 31st of October started about 2000 years ago. The original name of the Halloween is Samhain. Celts gave birth to this tradition. Samhain itself is the God of the dead who is believed to control the spirits of the dead, allowing them to rest in peace or to act wildly. Celts worshipped the sun and were very worried when it almost disappeared in winter. To protect themselves against witches, ghosts and demons coming into the real world, Celts made bonfires on the hills. They worshipped the sun to help them fight against the cold and dark winter days. The 1st of November was also the Celtic New Year. Celts came back to the hills to take a chunk of coal from the still glowing fire to light the cooking fire. They believed this brought fortune to their houses. After that they had huge feasts and other festive activities.

Romans, who came later to the territory of Celts, had another holiday on this day. It was named the Festival of Pomona, the goddess of fruit trees and gardens. Romans usually depicted Pomona as a beautiful girl with fruit in her arms and apples in her crown. They thanked the goddess for the harvest, organized games and races to have fun. In such a way the dark and light holidays mixed together and resulted in Halloween.

In Eastern Europe and Kievan Rus, people had similar holiday called Dziady. Literally, the word translates as "Grandfathers". Dziady is also dedicated to the dead who come back to our world for a very little time, but not as evil ghosts and ghouls, but as the spirits of our forefathers. During this feast, the ancient Slavs organized libations and ritual meals. The celebration was quiet. People remembered their forefathers, retold some facts and histories dedicated to them, and asked for their help and support. Unlike Halloween it took place twice every year (the last Saturday of October and April ). Nowadays in Belarus and Ukraine some families celebrate Dziady instead of Halloween.

Witch-ing you a spook-tacular Halloween!

HOW TO WRITE A SCREENPLAY FOR CINE-STORIES
Blog Discussions: 1 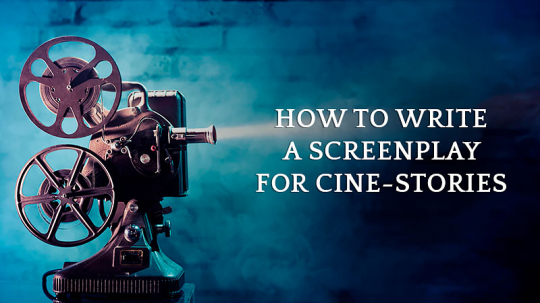 The rules for writing cine-stories scripts are very similar to traditional TV and feature film screenplays but are not as strict with...